Felipe believes that social entrepreneurship is able to transform societies. He has a passion for businesses that have an impact on the community and society.

He loves speaking about his experiences in business. His talks cover issues such as the need to change culture so that children are encouraged to be entrepreneurs.

Felipe is regularly invited to speak at schools, universities and companies. He recently worked with La Salle University in Colombia and La Alcaldia de Bogota in a new initiative to encourage social entrepreneurship.

Felipe is a great motivational speaker. He will inspire and motivate people. Felipe's account of his life, in particular, his experience of moving from Colombia to England at an early age are fascinating.

He has spoken widely about the difficulties of living abroad, fundraising, charity work, the law career and life-work balance issues.

In 2012, Felipe travelled around Colombia speaking at a number of universities and companies, visiting a number of charities and fundraising.

Felipe has organised and been the moderator in a number of international lectures and seminars. These lectures are attended by politicians, multinational organisations, government agencies and ONGs. 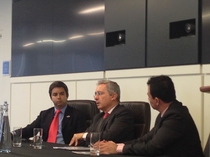 Felipe is a judge of Virgin's Fiver Challenge
www.fiverchallenge.org.uk

Felipe is awarded the Entrepreneur of the Year LUKAS AWARD 2015

Felipe is a guest speaker at the Annual Inspiring Women Awards

Felipe speak to students as part of Inspiring the Future event

My dream is to allow others to dream

Life is about endless experiences